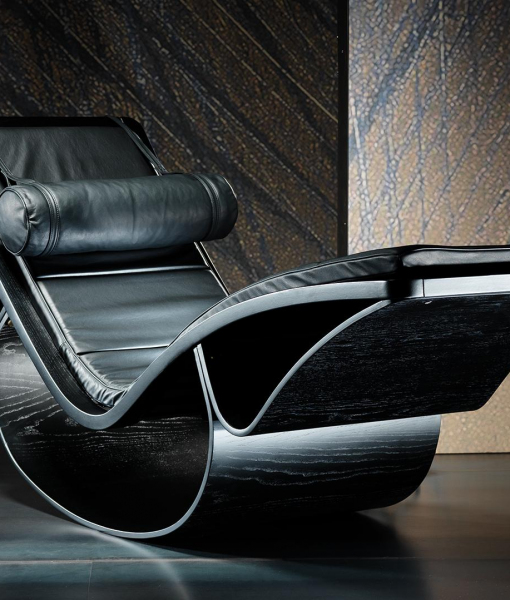 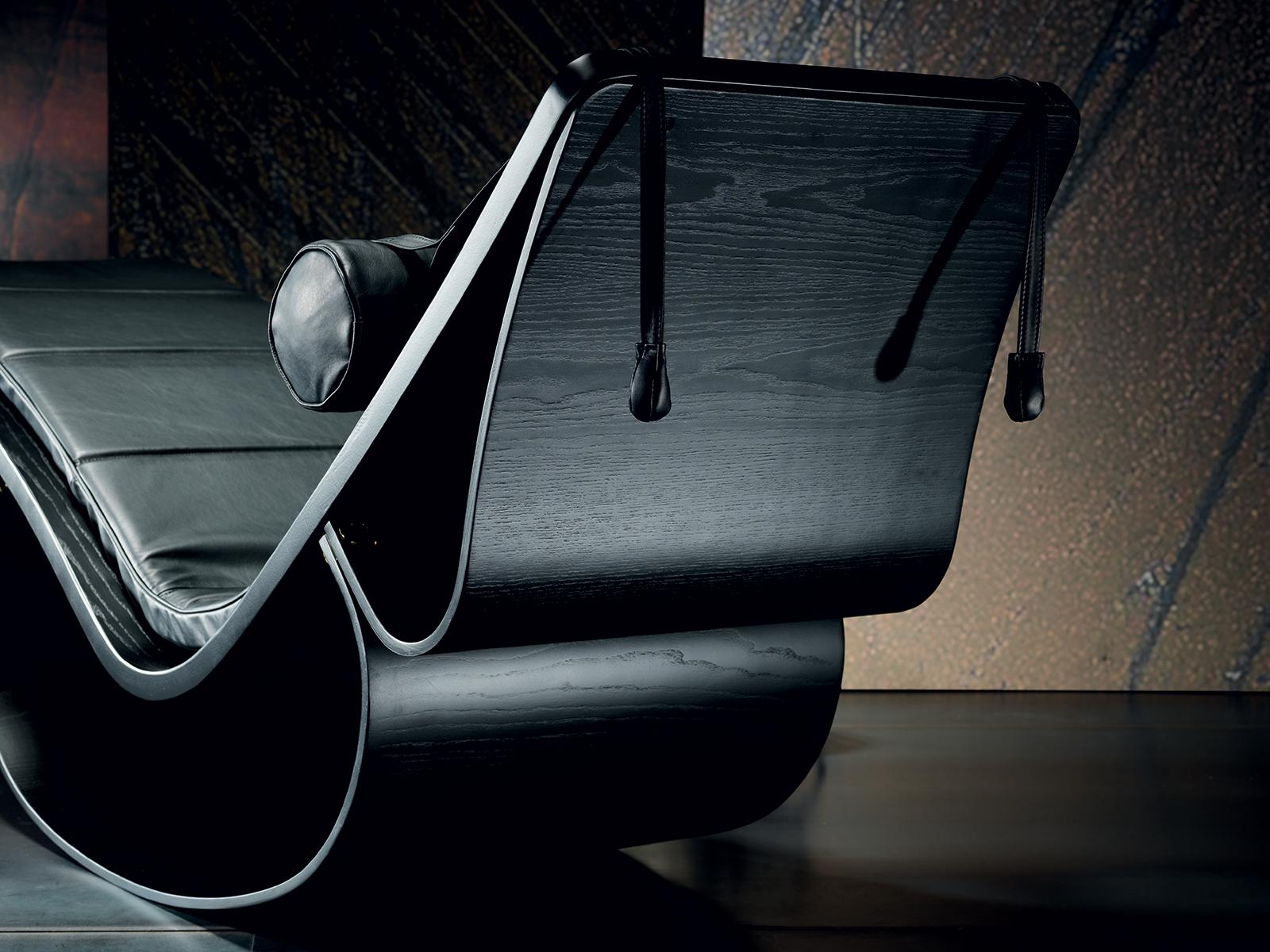 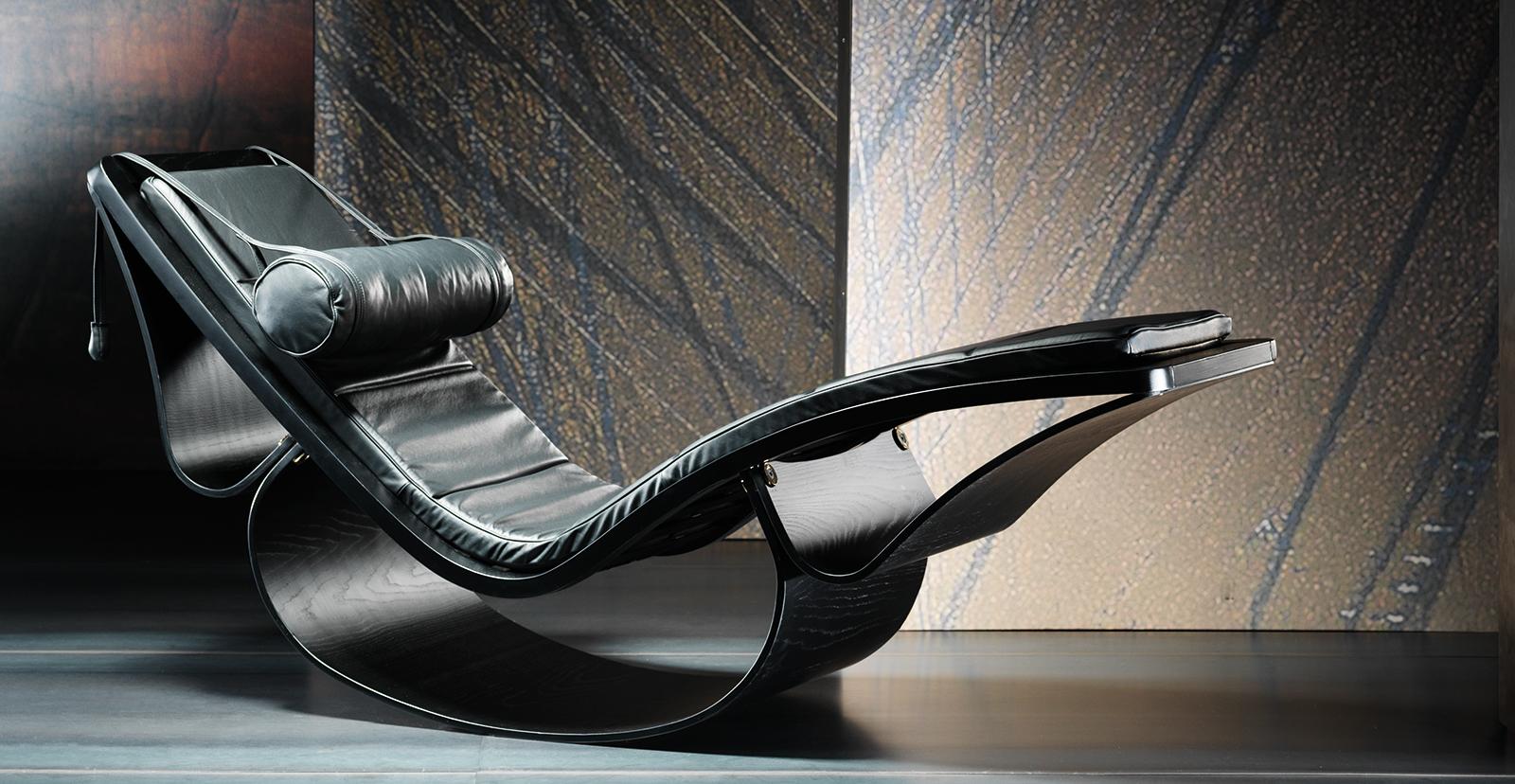 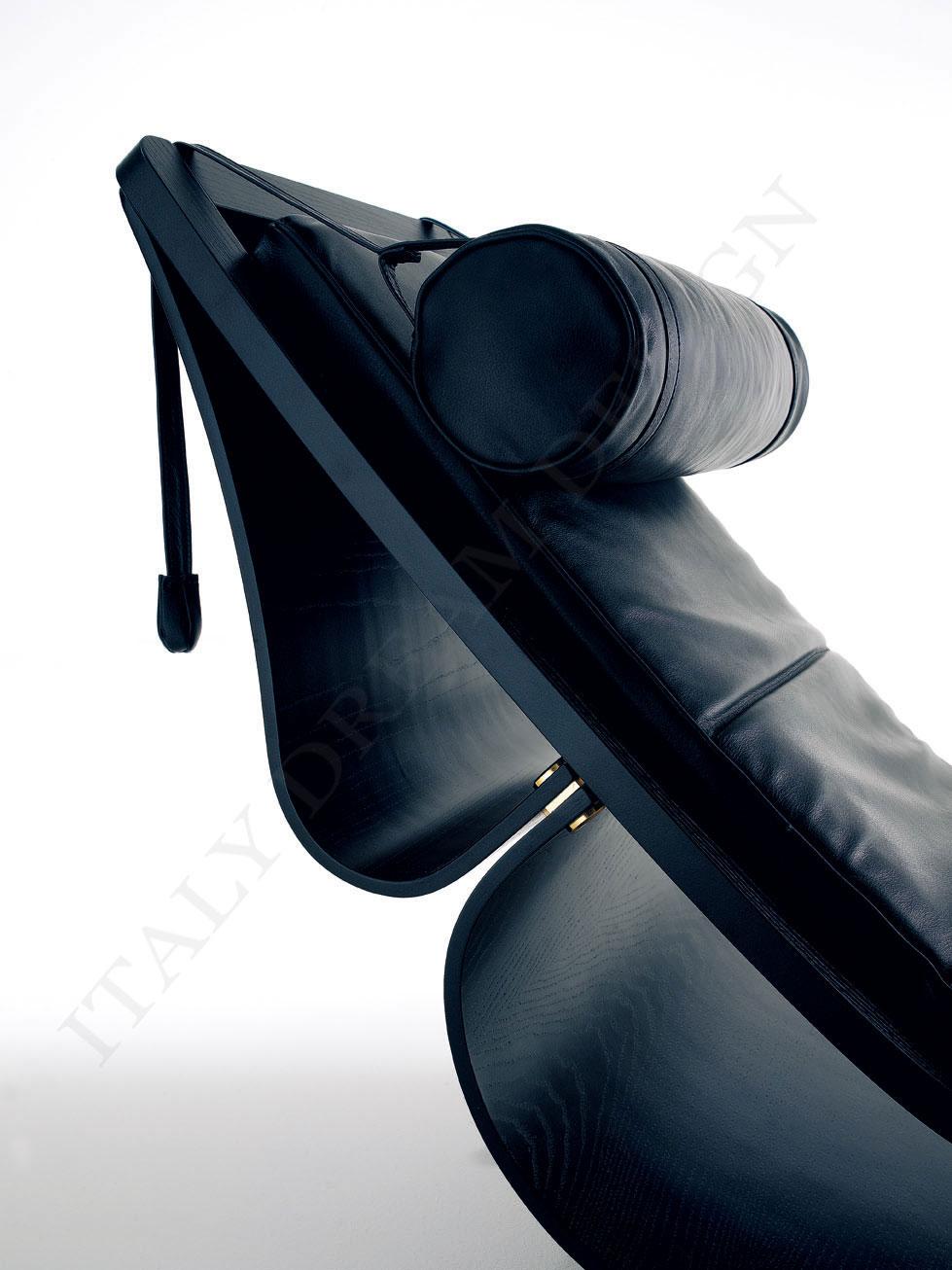 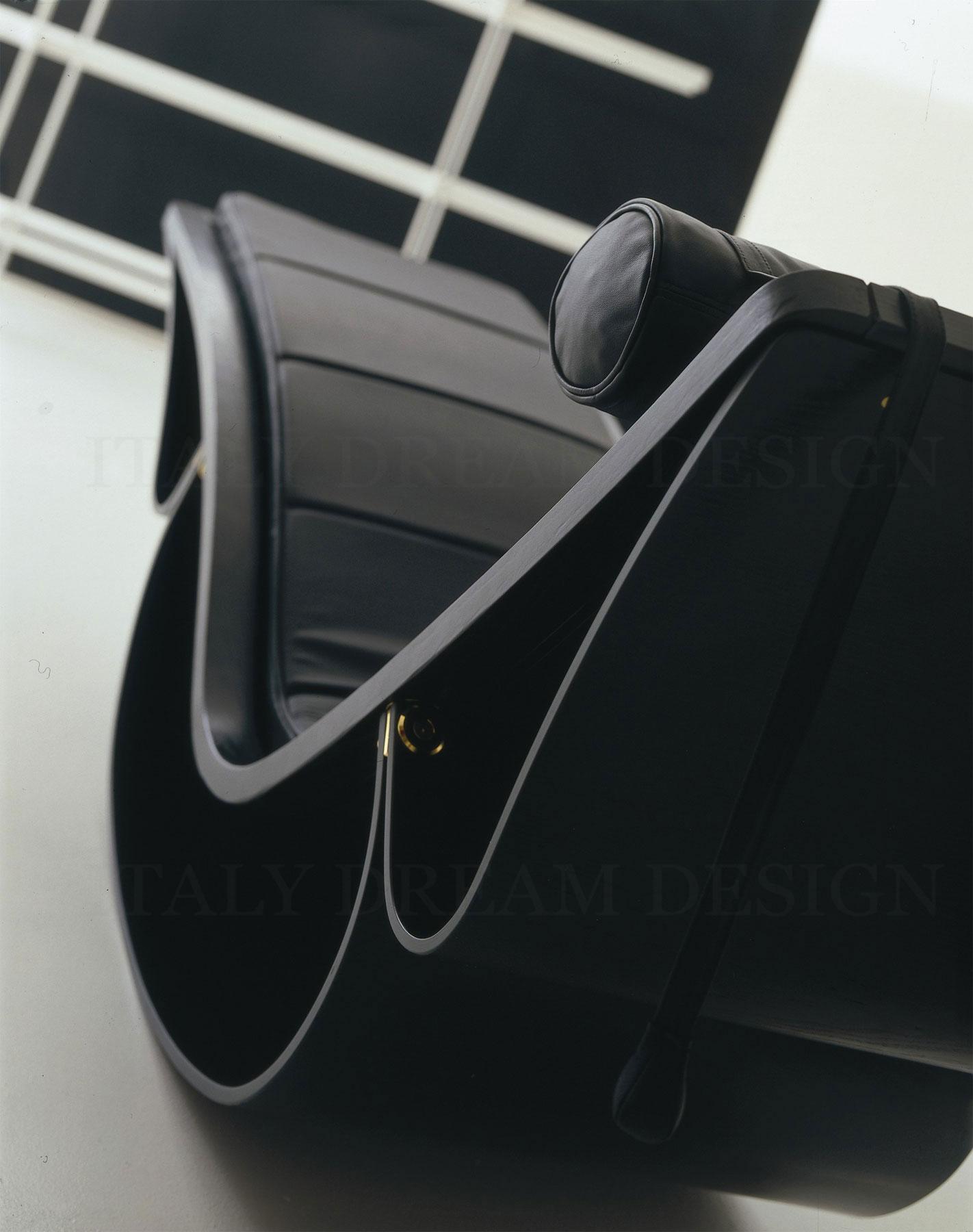 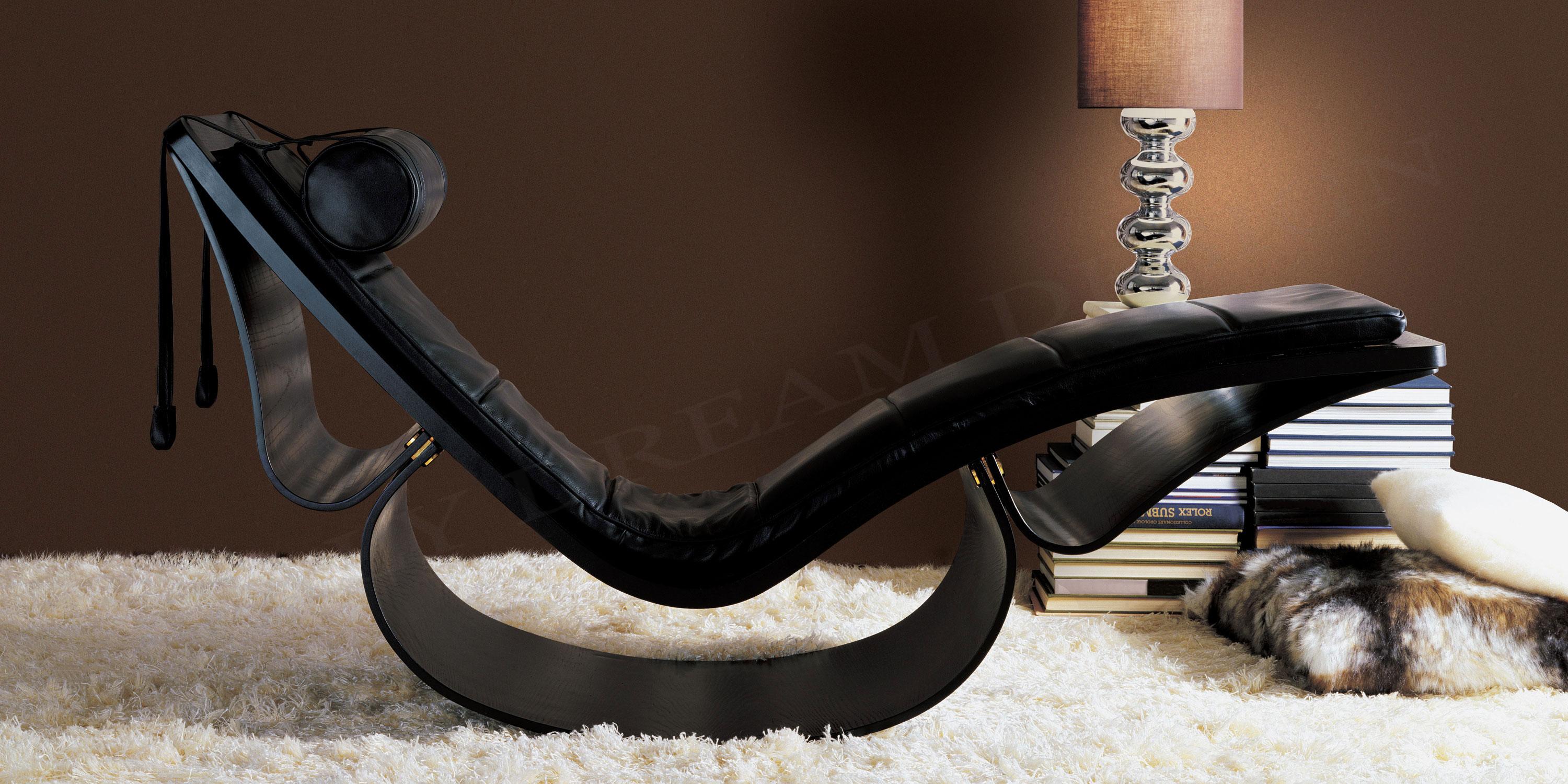 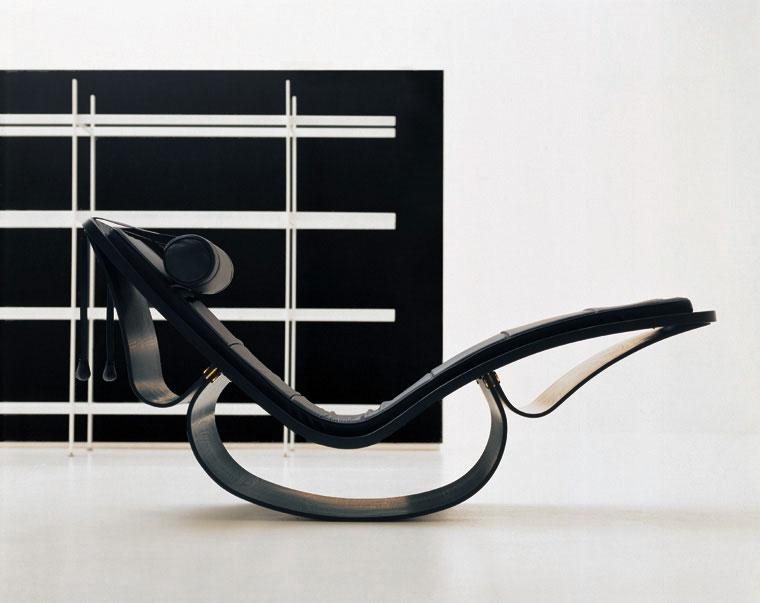 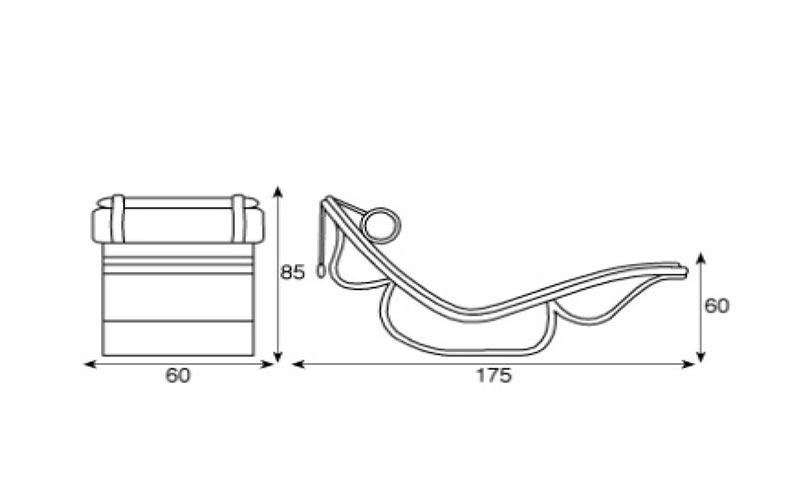 An elite chaise longue that will accompany your relaxation moments.

Rio has been designed by the legendary Brazilian architect Oscar Niemeyer, one of the most popular and important figures in international modern architecture.
Now it’s only produced under exclusive license in Italy.

The realization made in Tuscany, the cradle of Italian craftsmanship, ensures high quality and attention to detail.

The structure of this chair is composed of three convex elements. The first one, the largest, serves as a point of equilibrium of the chair. The other two, which are screwed to the first, serve as a support for backrest and seat. The material of the three common elements is the open pore black painted ash. Seat and back are actually only one piece long enough to comfortably accommodate the user’s legs.

The headrest is cylindrical and includes two leather cords completed at their ends by two small weights that facilitate adjustment. The mattress and headrest are both upholstered in pure aniline leather available in several colours.

This lounge chair is a tribute to the curves, so beloved and source of inspiration for Niemeyer, who wants to remember the mountains of his native city and the sensual women’s curves creating this unique object.
Today it’s a collector’s item.
This chair, a true artwork signed by a great master, a Le Corbusier disciple, is an investment both for its value and the endless charm will convey. 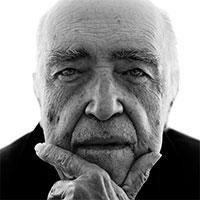 Oscar Ribeiro de Almeida Niemeyer Soares Filho (December 15, 1907 – December 5, 2012), known as Oscar Niemeyer, was a Brazilian architect who is considered to be one of the key figures in the development of modern architecture. Niemeyer was best known for his design of civic buildings for Brasília, a planned city that became Brazil's capital in 1960, as well as his collaboration with other architects on the United Nations Headquarters in New York City. His exploration of the aesthetic possibilities of reinforced concrete was highly influential in the late 20th and early 21st centuries.

Both lauded and criticized for being a "sculptor of monuments", Niemeyer was hailed as a great artist and one of the greatest architects of his generation by his supporters. He said his architecture was strongly influenced by Le Corbusier, but in an interview, assured that this "didn't prevent [his] architecture from going in a different direction".[3] Niemeyer was most famous for his use of abstract forms and curves and wrote in his memoirs:

"I am not attracted to straight angles or to the straight line, hard and inflexible, created by man. I am attracted to free-flowing, sensual curves. The curves that I find in the mountains of my country, in the sinuousness of its rivers, in the waves of the ocean, and on the body of the beloved woman. Curves make up the entire Universe, the curved Universe of Einstein."